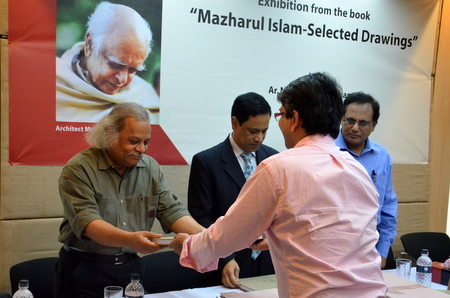 Muzharul Islam is the pioneer architect of Bangladesh and honored as the guru of modern architecture in this region. Although it's our long bad legacy of doing almost nothing about architectural publication in the country, resulting even at least a single book on this master architect was also not there. Someone had to come up and do the due job. Muzharul Islam is now 87, and his physical and mental health is rapidly deteriorating. We are supposed to do something (actually more!) before he leaves us!

A bunch of enthusiastic and passionate fellows recently cobbled up a book on his selected drawings.
Today (28th April, 2011) the book has been opened at the Dhaka Art Center entitled 'Muzharul Islam: Selected Drawings', Authored by Nurur Rahman Khan, published under the banner of Sthapotto-o-Nirman.
Shakil Mahmood helped in photographs and scanning the drawings, the graphics and composition of the book is done by ArchSociety founder Mohammad Tauheed and Sabbir Ahmed, Deanna Alam sorted and compiled the photos in the book.

Architect Nurur Rahman Khan is the devoted enthusiast who initiated the works of making a digital and hard-copy archive of Muzharul Islam's remarkable works in 2005 and thus the Muzharul Islam Archive was created. The Archive is physically hosted in The University of Asia Pacific's Department of Architecture, anyone can visit the archive, browse through high resolution scans of the drawings, read texts and also can see the original copies of the works. See the website of Muzharul Islam Archive:
http://www.muzharulislam.com
And he also spent considerable amount of time for collecting and compiling all the works, all the texts wherever published about Muzharul Islam from long, and he is still on it.

A small event is hosted today for the opening of the book and an exhibition has also been opened at the Dhaka Art Center, compiling some breathtaking original drawings of Muzharul Islam. The exhibition will run 3 more days.
If someone is sniffing around with a dissatisfied look on their face about where to find a good piece of work, must see this exhibition. This is called architecture, what Mr. Islam did, go and see yourself. 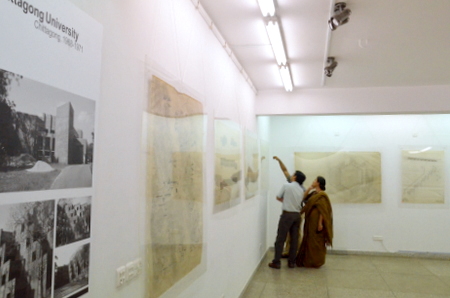 You must be logged in to make comments on this site - please log in, or if you are not registered click here to signup
Previous Next